KAtabatic winds and Stability over CADarache for Dispersion of Effluents

KASCADE is an initiative of Laboratoire de Modélisation des Transferts dans l’Environnement (LMTE), CEA Cadarache and Laboratoire d’Aérologie, University of Toulouse – CNRS. The project is dedicated to boundary-layer processes over complex terrain in a context of sanitary impact assessment. One of the main issues is to increase the understanding of the dominant wind pattern by means of observations (field campaign KASCADE) and mesoscale modeling. On this website all observations from the KASCADE field campaign are made available.

The field campaign consisted of a combination of profiling systems (SODAR, tethered balloon, radiosoundings), turbulence and radiation observations (flux divergence tower), and standard meteorological observations at different sites. In this way the field campaign is designed to investigate the role of several key parameters for the stable boundary layer formation and the consequent (valley) winds. 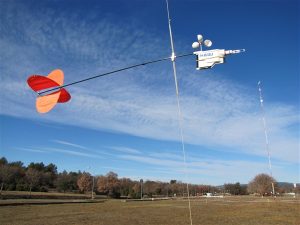 One of the important factors that determine the environmental impact of particles and gases is their atmospheric dispersion, which itself is largely controlled by the stability of the atmosphere. During the day, due to surface heating by solar radiation, convective boundary layers develop up to around 1 – 2 km agl. This layer is efficiently mixed, transporting heat, moisture and atmospheric trace species vertically throughout the boundary layer depth by means of turbulent convection. Once they have reached higher layers, these trace species can be transported by larger scale winds. During such convective situations, the atmospheric dilution is relatively large, and thus the near surface atmospheric concentrations are lower.

On the contrary, during clear nights as the ground surface is cooled, stratified stable layering develops which can extend up to a few hundreds of meters. Furthermore, turbulence is generally weak or even absent, and the dilution of pollutants is weak. Therefore concentrations in the lowest part of the atmosphere can be high during such conditions, making the stable boundary layer the most penalizing situation for impact assessment.

The conditions suitable for these penalizing situations, associated with atmospheric stability, are found under weak synoptic forcing and clear-skies. Such conditions frequently occur in Provence where orography is complex, as it is the case around the CEA Cadarache site, with the regular development of valley winds in the middle Durance valley and its tributaries. To investigate the valley wind behaviour, the KASCADE (KAtabatic winds and Stability over CAdarache for Dispersion of Effluents) project has been designed. It consists on two complementary field campaigns conducted in and near the Cadarache valley.

The first one, called KASCADE 2013 and focusing on the vertical structure of atmospheric parameters, was conducted in the winter of 2013 including continuous observations (flux tower, Sodar and Cadarache observational network) covering a 3-month period and 23 intensive observation periods (IOPs) during which tethered balloon experiments were conducted and radio-soundings were launched.

The second one, called KASCADE 2017, was designed to study the spatial heterogeneity of atmospheric parameters in the Cadarache valley during the winter – spring 2017. Continuous measurements were performed (mostly close to the ground) with 21 meteorological stations. Radiosoundings and tethered balloon profiles were added during 14 IOPs to complete the continuous observations.